i did my replacement yesterday.
got the ARP red coil pack for the s3.
they are supposed to have an increase of 10% over the stock coil packs. 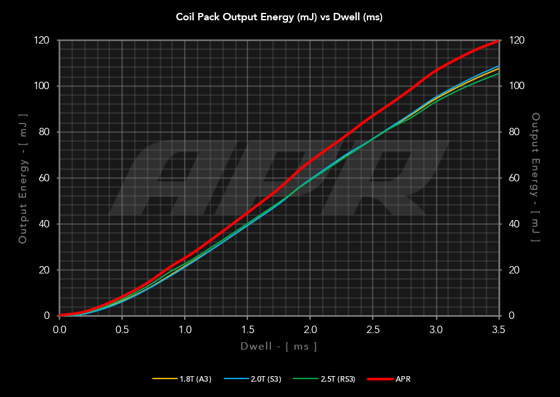 the NGK ruthenium Hx is the newest spark plug from NGK's lineup. i left the gap at what they came with. its just a tad tighter than spec but it runs great. my thoughts, expanding the gap to exact specs is pretty hard to achieve. also, i could damage the tip. in the end, after some use it will wear away and the gap may become larger on its own. it doesn't hurt if its smaller but when its too large i can cause issues.


its only been a day and its much smoother. acceleration is great. i didn't think i would feel a thing. now i have to say i can feel a difference. its not additional power but just linear to redline.

make sure to keep oem specs. don't do like some idiots i have seen do, use rs7 spec for the plugs or one step colder plugs. don't do that! the ecu doesn't know what's going on and won't run right. as these people have now experienced problems and blame either APR or NGk parts.


here is how to change them out.

That's impressive for just a coilpack hell i'd get them just because they're red. did you swap out the plugs as well and what did you go with?
OP

the red is what i also got. (the spark plugs is in the title)
i was thinking of blue to match the car but then i thought lets keep it a little more low-key. the red does look different but still kinda stock looking in a way. like it was supposed to be from the mfg as an S car.

i am pretty happy my butt dyno feels something different.

while i was doing this, i was thinking of figuring out how i might do the big 3 grounding. that has always netted positive results. since this is a pretty electrical car i think it would do very well with that mod.

im doing the downpipe within a few weeks. just waiting on some tools to help with the install.

hah I'm blind I didn't notice the title thanks.
OP

add to this once you have it done. im curious what your take on it is as well. you may not feel anything.

i did do an aggressive drive last night and noticed that it does feel very "healthy". before it would feel like the car struggled as i did partial or full throttle.

again my car is not tuned. just a few bolt on's. very negligible upgrades unless i do an ECU tune. i may even max out all the bolt on's to see what if anything is worthy to note in the end.